Home » When Is Rakhi In The UK? 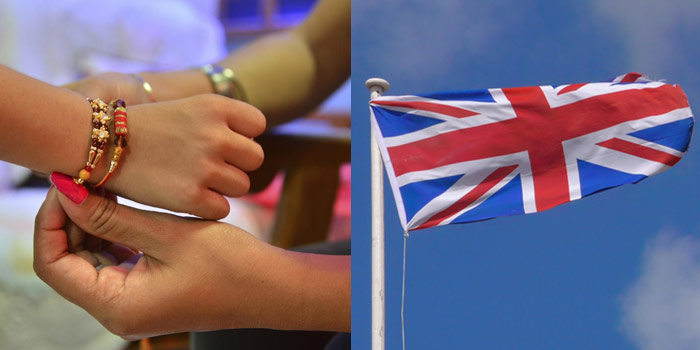 The festival of Raksha Bandhan observes the celebration of the love, care, and affection among brothers and sisters all across the world. The Indian festivals have gained good recognition worldwide due to the Indian population found in various countries overseas.

The country of the United Kingdom is one of the prominent international countries in the world where people of all religions are found. Therefore, a culmination of various traditions and cultures can be noticed there. Today, the population of Indian in the UK is about 1.4 million, making it the largest prominent ethnic minority community in the country. Due to the Indian population present in huge numbers in the country, the rich Indian culture and tradition has gathered everyone’s attention. One such amazing manifestation of Indian heritage is the festival of Raksha Bandhan that epitomizes the strong sibling bond. Just like in India, people of Indian origin residing there ensures that the Rakhi celebrations are never missed owing to the distance factor and ensures to send Rakhi to the UK from India along with gifts to their brothers and sisters to keep the jollification ongoing no matter what.

Celebrations of Raksha Bandhan in UK

As the festival of Rakhi is mostly celebrated by the Indian community in the United Kingdom, its celebration is the same as it is celebrated in India. The ritual of Rakhi tying ceremony is performed by sisters on the wrists of their brothers and exchange Rakhi gifts with each other. The celebration of the Rakhi festival in the UK has been different every year.

In 2015: Raksha Bandhan was organized by the British Hindus at the British Parliament where diplomats and political leaders gathered to attend the event.

In 2016: The personnel of the UK Armed Forces celebrated Raksha Bandhan at the Shree Swaminarayan Mandir in London. As there are more than 2,500 Hindus in armed forces in the UK the celebration was also meant “to celebrate the contribution of Hindus to the defence of the UK”.

In 2017: The Rakhi celebration witnessed the coming together of the UK armed forces with the British Hindu communities. The event was celebrated at the Ministry of Defence in London. Moreover, there was also a tour organized in various temples in Swindon, Liverpool, Newcastle, and London. A Rakhi tying ritual was also observed by the personnel of the Ministry of Defence and Armed Forces.

When is Raksha Bandhan in UK: Auspicious Date & Time in 2023

The rituals of Rakhi tying on Raksha Bandhan must be performed during the auspicious time and not during the Bhadra muhurat. The dates and time of the festival in the UK are given below:

Q. How to Send Rakhi to the UK from India?

The festival of Raksha Bandhan is dedicated to the celebration of the bond of brothers and sisters. And, the love and affection between siblings is least affected by the miles of distances. So, sisters who have their brothers in the UK and cannot be there beside them for the celebrations can send Rakhi and Rakhi gifts to them using the services of online Rakhi delivery of reputable and efficient online Rakhi stores in the UK. Such websites have a comprehensive collection of Rakhi and Rakhi gifts for brothers in the UK for the festive occasion. Moreover, the facility of timely doorstep delivery is also available to their customers.

Q. What are the best Rakhi gifts for brothers in the UK?

Q. What are unique Rakhi return gifts for sisters in the UK?

Q. How do Indians celebrate Raksha Bandhan in the UK?

The celebrations of Raksha Bandhan are quite similar to the one performed in India. The British Indian in several parts of this country perform the Rakhi tying ceremony with their siblings and exchange Rakhi gifts with them.

Q. What are some of the best Rakhi in the UK?

As the UK is a foreign country where you want to keep the Indian traditions alive for your brothers residing there, auspicious Rakhi threads make the best choice for them. You can send Ganesha Rakhi, Rudraksha Rakhi, Swastik Rakhi, Silver Rakhi, Om Rakhi, Sikh Rakhi, Mauli Rakhi, AD stone Rakhi, etc. with roli and rice to your brothers for traditional Rakhi celebrations