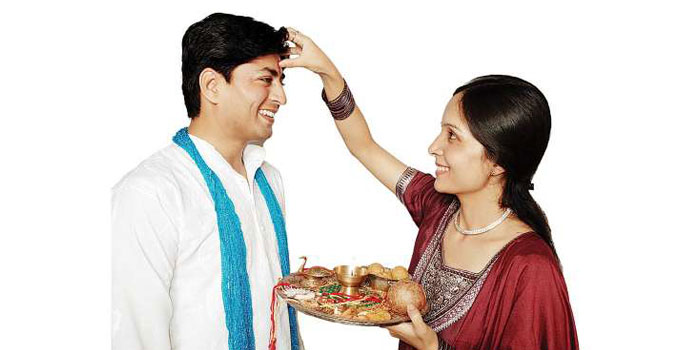 Why did a sister put Tilak on her brother’s forehead on Raksha Bandhan?

On Raksha Bandhan, a sister follows many traditions while tying rakhi to her brother, and one of the rituals is applying Tilak on her brother’s forehead. A red lead Tilak is applied to the brother’s forehead to promote positivity and spirituality. A tilak is put on the temple to purify her brother’s thoughts and help him be mentally safe and sound.

The Tilak is often mixed with rice, and a sister ensures the rice stays on her brother’s forehead since rice destroys any evil surrounding her brother. Hence, a mixture of roli and rice put on the forehead of a brother on Raksha Bandhan protects the brother from destructive thoughts and evil intentions.

But we don’t just put a tilak on Raksha Bandhan’s forehead. Tilak has a more significance, and we must understand its religious importance better. Continue reading to know more about the mark of Tilak.

‘Tilak’ is a Sanskrit word known as a ‘mark’ in English. A Tilak signifies the sectarian connection of a person to the Hindu community. It doesn’t matter if you are a man or a woman. A tilak is put on everyone’s forehead in Hinduism and signifies equality. While women put red dots of Tilak on their foreheads, the Tilak of men can be of different styles and designs.

READ  How to Surprise Brother on Raksha Bandhan 2022?

Many people put a tilak on their foreheads daily, but it isn’t necessary to always put a tilak on the forehead. A tilak is essential on special occasions like festivals, religious offerings, temple visits, other vital events, etc. A tilak mark can also be put on the neck, chest, and other body places, including hands.

A tilak mark is usually made by the ring finger and thumb of the right hand or by a metal stamp. There are different shapes, types, and colors of a tilak, each of which has a different meaning and varied sectarian. Here is a list of different kinds of tilaks:

And these are all the types of Tilak you can see on the forehead of Dharmic people. While the list defines the origin, kind, and color of a tilak, their shape and design also tell so much about the person and why they have a tilak on their forehead.

Significance of wearing a Tilak:

There is a considerable significance in wearing a tilak in Hinduism. A tilak is seen as a mark of respect and dignity. Hence a Tilak on the forehead is a symbol of respect and status of a person.

On the forehead, a tilak is placed between the eyebrows, also known as the temple. This is the place where the Ajna chakra is located according to Hinduism. This place is chosen to put a tika because ajan means to command or perceive the information that is only visible to our intuition and otherwise cannot be seen by our eyes. So, putting a tilak on this spot ensures any negative energy from our intuition power is removed, and our conscious and subconscious mind works better.

Our body is considered a sacred place, a gift of God, and a spiritual abode. This is why we must respect our bodies. Hence a tilak is also seen as a mark of respect and admiration for our body that works tirelessly for us.

Hence we put a tilak on our brother’s forehead to protect him from all sorts of evil and help him always think straight. Apart from that, a talk has many uses and reasons to put on anyone’s forehead, and all these reasons are excellent. So, apply Tilak on your brother’s forehead and gift him a better conscience and an improved thinking power with an evil-free life.

Book lover, storyteller, nature enthusiast, content writer, and an easily fascinated person, I am all of it and much more. I create art in my free time while making web browsing interesting for you professionally.